By organizing participatory art exhibitions inside and outside penitentiary centers, Art Without Bars offers the possibility to experience a learning process that makes the chances of inclusion after release real.

First because of the associations art offers that generate artistic expressions that appeal to the critical and creative spirit of inmates and for citizens with a juridical past. Secondly because during presentations for the public, Art Without Bars gives the government and the wider community an insight into how art perception as a high-quality instrument promotes the rehabilitation of inmates and former inmates.

Questions and requirements of inmates like in this example, which we found at the back of a drawing (2007), the recent basic law in the future will approach.

The Basic Law has been tightened in 2013. While we hope for a more humane treatment, it seems that the size of the new prisons give a different signal. 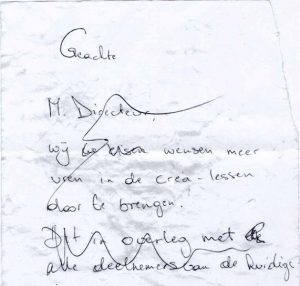 What is the basic law?

The basic law “prison service and legal position of inmates” voted on 12 January 2005 is a breakthrough step in our penitentiary history. Till then there was a lack in the law for the rights and duties of inmates. The law also stipulates the basis principles of detention and the exact organization of the prison service.

You can find the complete version of the basic law on: http://www.just.fgov.be/en_htm/informatie/htm_justitie_atotz/ldp-bw.pdf